This is part 3 of the test stream. Enjoy!

A new post! WOO!
I've done a test streaming last Saturday on Picarto.tv. This is to test if streaming a sculpting session is possible for me. And it is! Though at a low resolution since my connection isn't fast enough for HD streaming. But this is great news since I can now do more videos.

Join my stream at: https://www.picarto.tv/live/channel.php?watch=frikimidz
There isn't a schedule yet. In the mean time I'll be tweeting whenever I'm about to stream.

In this session, I sculpt Marigold the Harpy, an OC by my friend, Bug with reference art done by the talented formaldehyde. Part 1 is building a simple armature and shaping up the body.

"Look guys! It's Colette with horns!" 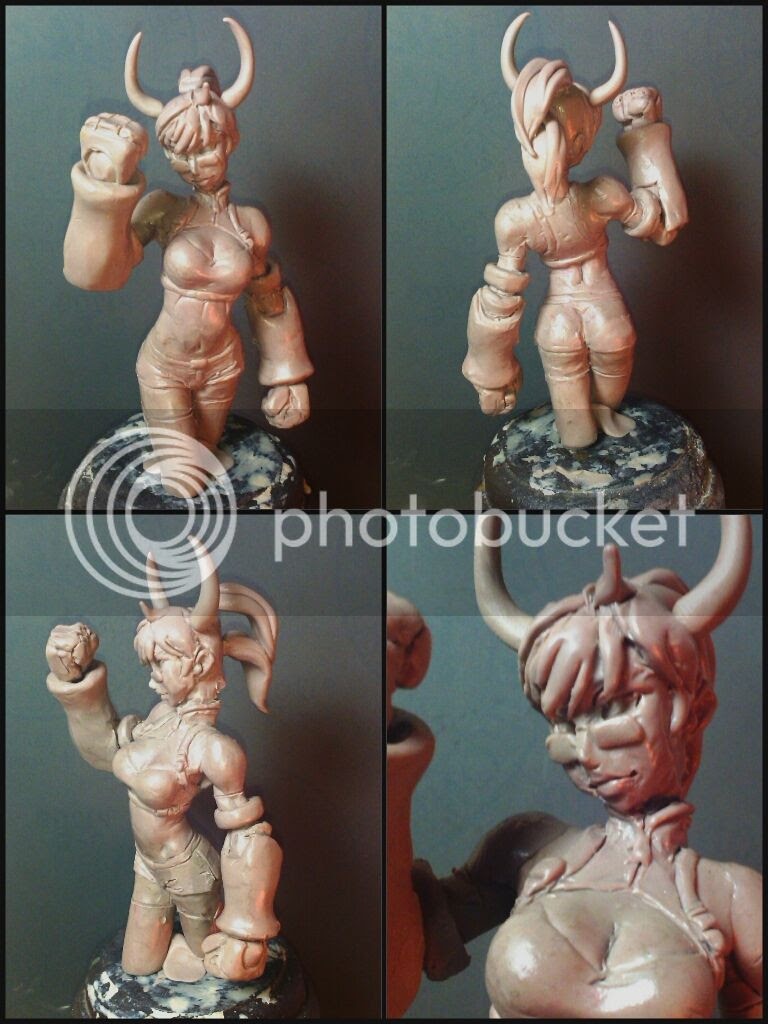 This was a speed sculpt challenge I did on the paint chat.
The character was designed by 4maldehyde. I've included the sketch of the character below.

The sculpt was done in roughly 30 minutes using my softest wax (MwaxZ E). I changed the pose a bit from the sketch to give her more character. In my mind she is the older sister-scientist/librarian type. I really like the design of this unnamed (at the time of this post) character, and would consider making a full body-mini-figure of her in the near future *hint*hint*. This is the Undersea Demonfish Princess, designed by Pennicandies.
You can see the original design in this tumblr post. NSFW warning: TITS and nips!

This is the 3rd girl I sculpted, but didn't finished her until I've finished with Cleophidia.

I hadn't give the surface treatment on this sculpt. You can see all the uneven surface. This is why you need to have rakes and loop tools, folks. I have trouble rendering a nose-less character in wax. The different shades of wax seen here is because I ran out of wax after making the torso and the next batch of wax that I made have a lighter shade. I wished I took more care on making the abdomen eyes. Here it looks like something other than an eye. 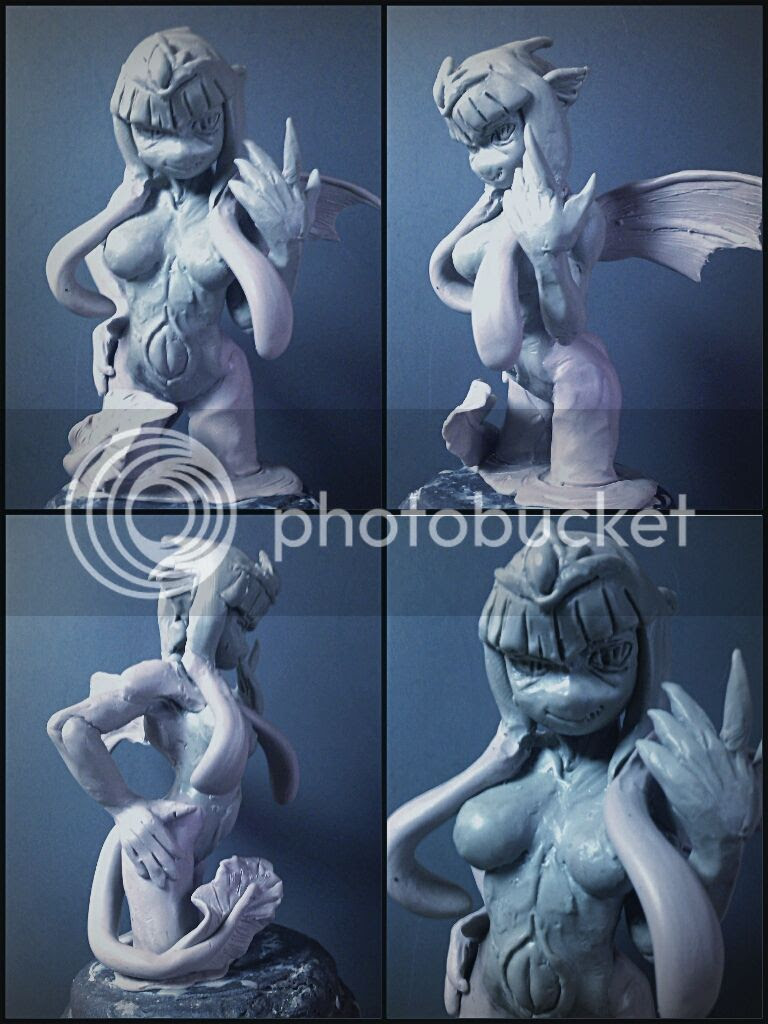 October has passed and so to has Monster Girl Month.
I failed in updating this blog with the sculpt that come from it, so in the next several posts I'll share them all with you guys. Enjoy!

This is the 4th Entry for Monster Girl Month. Cleophidia the gorgon. She was designed by a friend in the paint chat. The challenge for this sculpt is making the hair. She has short curly hair, and for the longest time I was stumped on how to render it in wax. Fortunately, I've come across Mark Newman's afro hair tutorial. I modify the technique a bit for this sculpt. The result was better than I expected, thought it could use some more polish. 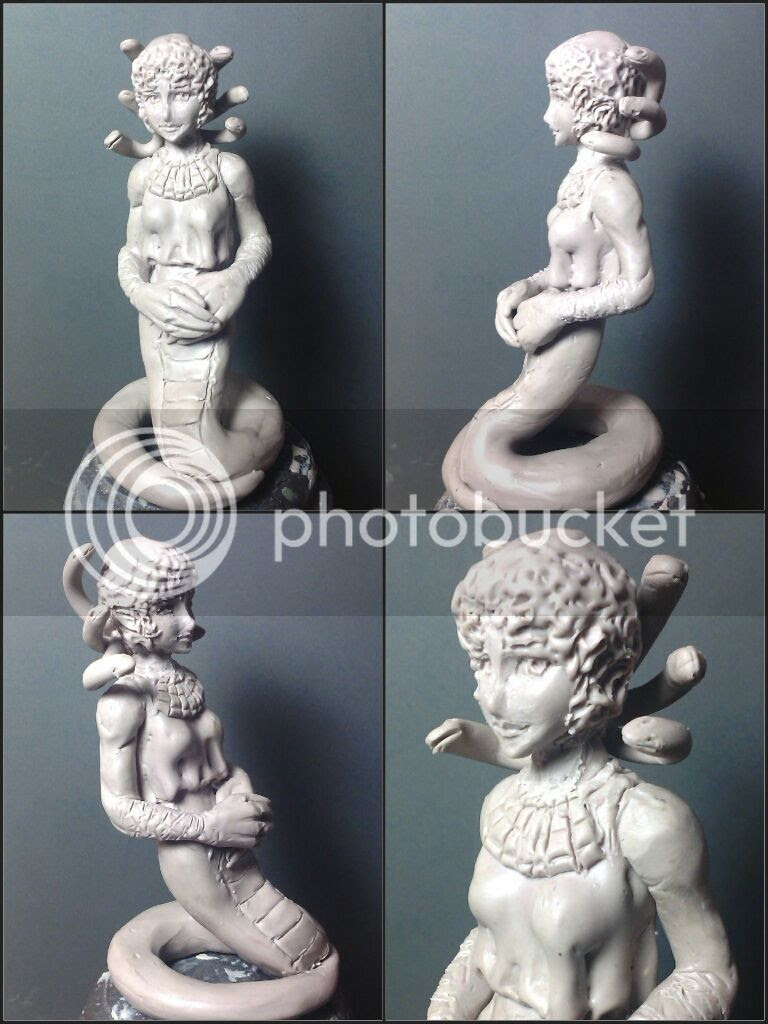 A sculpting webminar from one of my sculpting hero, Erick Sosa. If you are interested in sculpting, spare the time and watch this. 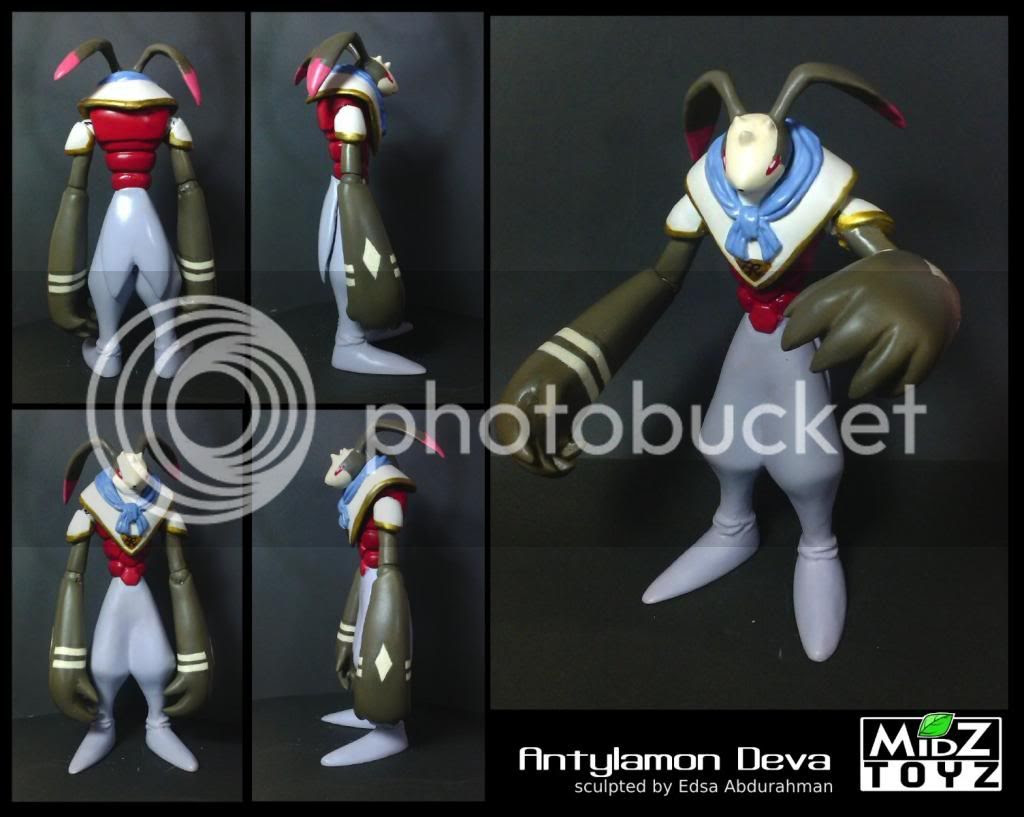 I sculpt this Antylamon Deva figure for a private commission. The figure itself is 5,5" and made from polyester putty and MpoxZ epoxy putty.The joints are made using revoltech joint. There is a total of 4 articulation point. Painted with artist acrylic.
Diposkan oleh Frikimidz pada 1:00 AM 2 comments: 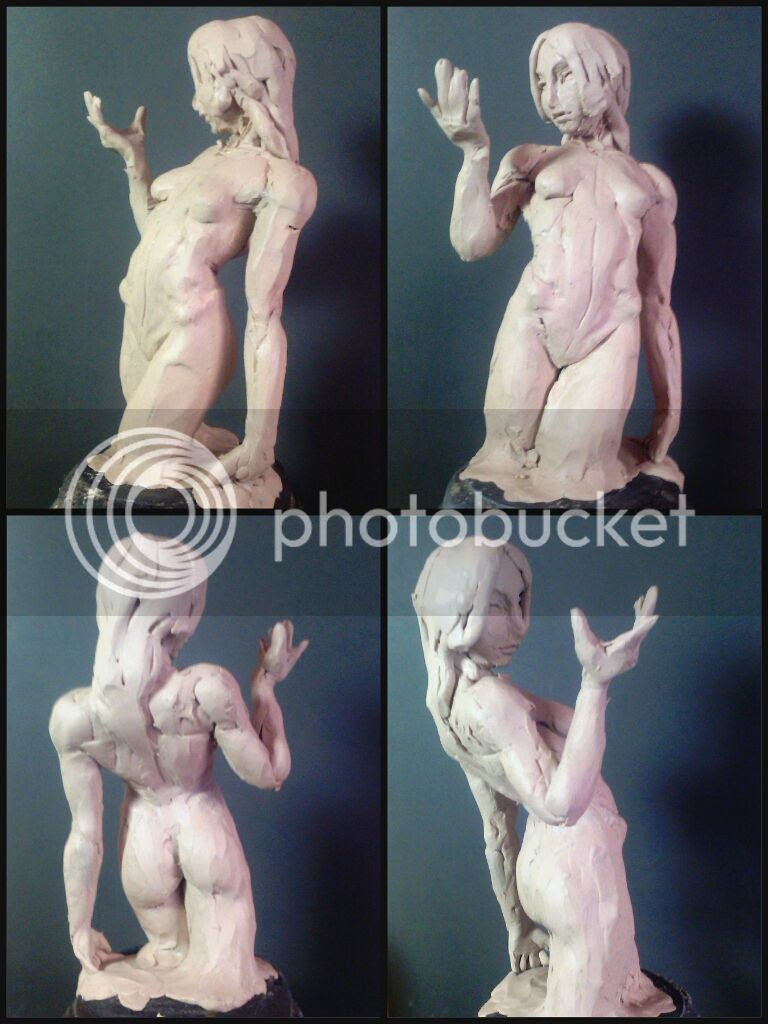 I'm doing a mini sculpting series with the Monster Girls theme for the month of October. I can't do a daily sculpt but I think I can manage 2 sculpt per week. The sculpts will be posted every Wednesday and Saturday. The slime girl pictured here is not part of the series. It was actually a speed sculpting exercise that leads to the Monster Girl Month 2-per-week sculpting challenge.

The first two entries can be seen after the jump!

A very good series of sculpting classes. Check out his channel for more videos.

New tutorial on how to make rigid mold to transfer your wax/clay figure from. Do sorry about the audio, I do need to practice my English pronunciation more. Enjoy!

New speed sculpting video! This time I did a speed sculpt of a manga-style elf bust. The material used was soft wax clay. I'm aiming for a more moe-fied look. I did this sketch in about 10 minutes. I will do a more 'realistic' take on the same subject in the next video.

This kind of videos is much easier to produce than a full on 'tutorial'. This is  good because I can make more videos faster. So be sure to tune in next week!

If you're a fan of Takayuki Takeya, sculpting or design in general you need to see this. It's a pity that it's not subtitled for international audience. One of my new year resolution is to sculpt more this year (and get more commissions done). So to start that off I promise myself to make a new figure every 2 weeks, more or less. I have this idea of making Monster Girls creature sculpts since back in 2007. So I thought this was a great time to get the project going.

Currently I've sculpted 2 monster girls. The first one was  Harpy and the second one was Nagja the gorgon. These and future sculpts will be made using my MwaxZ S sculpting wax. I will be sharing my method and technique in making them in this blog, Midztoyz facebook page and my tumblr blog. I usually update my tumblr blog first and then compile the posts there in this blog. I will also be making more videos on this, although not as a weekly scheduled upload like I previously intended. Producing weekly videos is a large undertaking.

More pictures of Harpy and Nagja the Gorgon after the break.
Enjoy!

How to Make a Wax Model with Elenor Crook

Very interesting video of artist Elenor Crook, a sculptor specialising in wax anatomical and surgical models, demonstrates a few of the techniques employed when making a wax model. She use a very brilliant technique in making skin texture. Watch it and you'll see.

New video tutorial is finally up! This time we'll be sculpting feathers on a wing. As usual, I used MwaxZ sculpting wax for this demo. I learn how to do this from reading this article on sculpting bird wing. I recommend you check out the fur tutorial too. If you've been following my tumblr blog , you'll recognize this as the wings for my current Harpy sculpt.

Sorry for the lateness. Making a weekly video is harder than I expected. Be sure to check back next Saturday for another new video!

5 Tips to Be a Successful Artist!

Set your mindset to be a successful artist. Leonardo really nailed the points here, if you're an artist or doing art and want to achieve more from your artwork, watch this!

I'm sorry I can't keep my promise of uploading a new video yesterday. Still haven't finished it yer. The video will be up soon though.

I've set up a Tumblr blog for midztoyz. It's a very fast and convenient place to share my newest (and some old) works. I often times post WIPs there and then compile those posts in this www.midztoyz.com. So do visit http://www.tumblr.com/blog/frikimidz and follow me if you like.

As promised there will be new video every week on our youtube channel. This week video will be up by Friday.

Sketch from the past: Pirlouit/ Peewit

Sometimes a commission just never works out. This is one of those time. Several years ago I was contacted to make a 4" figure of Pirlouit (Peewit if you're in the states) for a client. I got as far as this sketch before abandoning the project. That project taught me the importance of making a contract and NEVER work on spec.
Lesson learned, experience get, bussiness skill level up.

More pictures after the break.

More and more sculptor are now moving to a digital medium. With the advancement in 3d printing technology, that is a natural progression. Still the basic skill sets are the same, just the medium changes. Traditional and digital sculptors are still sculptors and the best thing is, we can all learn from one another.
In this video youtube user zbro z demonstrate how to sculpt the elf body in zbrush. I like this because I used a similar method in sculpting the torso. Don't forget to check out his other videos on the channel.

Today my channel has been promoted to Youtube Partner.  YAY!  With this comes a new resolution of having more videos regularly uploaded, hopefully, at least one every week. Though this is not a new video, I've captioned this video in English so more people can enjoy and learn from it. Turn the CC on!

So See you next week for a new Midztoyz video! 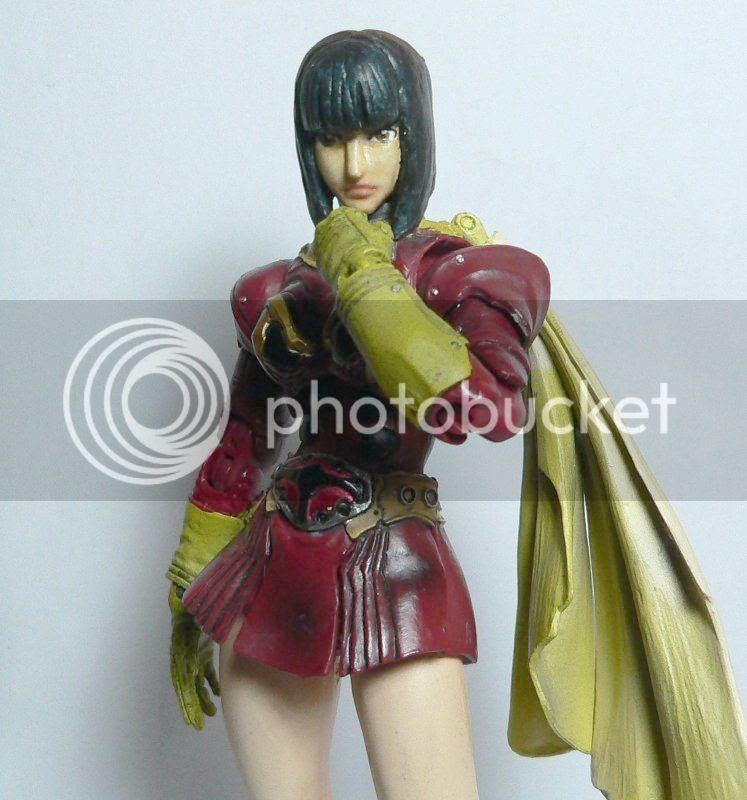 This is a side project of mine. I always like the design of SIC figures. But the head sculpt of Tackle leaves something to be desired. So I made a bishoujo style head sculpt for it. I called it Denpa Hime (electric wave princess). I based it on the appearance of Tackle in the Decade Movie. If you thought that the face looked similar with a certain character from One piece, that was no coincidence. I use the POP Nico Robin to model the face.
More pictures and story on the making of this after the break.