I've open the comments for non-members. So now, anyone can leave their comments.
So comments away!
Diposkan oleh Frikimidz pada 5:52 AM No comments:

Email ThisBlogThis!Share to TwitterShare to FacebookShare to Pinterest
Label: misc.

One of my dreams is to make a full action figure, with all the joints and stuff. It's hard but I'm trying my best to achieve that. If I failed, at least I could say that I've tried. By 'examining' a revoltech figure (REVY!!!), I made this little thing. Look familiar? It should. It's the only part of my first BIMA that ever gets cured. My friend kindly sanded and puttied the whole arm. Thanks Ericko, you da man!

To make the joint, I first drill a hole in the part where the elbow should be. Next I saw the arm about 1 cm below the drilled hole. Then, I saw the arm again, this time 1 cm above the hole. The I spilt the piece in two. These pieces will be the rotating part of the joint. I then cut and sand the piece to make it easier to move. If you're confused, just look at the pictures. If you're still confused drop me a line on the comments. 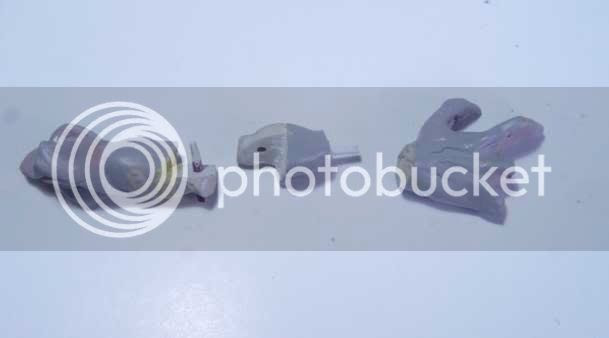 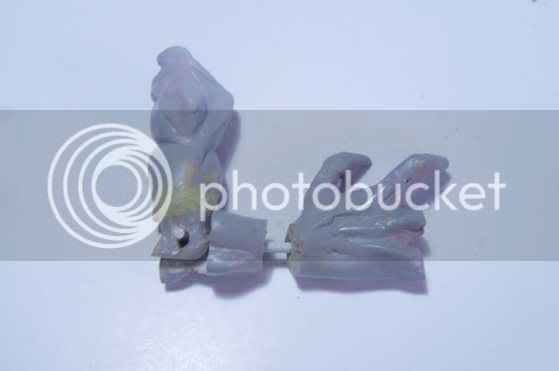 The yellow putty you see on the upper arm is the place where I glued the rotating piece. I used a sprue from a kit I have to make the pivot point. I plan to make an effort to create a ball joint next.

Email ThisBlogThis!Share to TwitterShare to FacebookShare to Pinterest
Label: production

I've promised to post picture of this figure long ago. So here it is.

Introducing Arjuna. She was shown in my booth at the Toyfair yesterday. So for those of you who missed the 3rd Jakarta Comics and Toyfair, and my booth, here it is.

This figure stands 15 cm tall and it is my first completed protoype. It is made mostly of polyester putty and a bit of epoxy puty for the fingers and small details. The production for this prototype was very rapid. It took only 3 weeks from oil clay to the figure you see now. I must admit I was pleased of the result, eventhough I know I can do it better if I have more time.

Well now I have. With the toyfair over, I think I'll fix this baby up. If you look closely at her left hand, you'll see her thumb is missing. This happend during the first day of the Fair. A guy knocks her over by accident. I was shocked and a bit furious, but the guy instantly apologize for it so I let it go. Besides, I plan to redo her left hand anyway.

The 3rd Jakarta Toyfair is finally over.

Before we begin, I would like to apologize for the lack of picture in this post. I forgot to bring my camera to this event T_T

It was a great event! Eventough I can't sell or trade my kits (I'll explain in later posts), the response from the crowd was astounding. At least in my views. The best part is when I tell them that my figure is scratch built, and that anybody can make it too. Many asks on the technique involve in the production process, the materials used, etc. Since I can't explain all the steps, that would take too long, I just redirect them to this blog. So be sure to stay tune for more tips and techniques in the future!!

In a bussiness point of view, the fair also was a great way to meet future clients. I've got some promising offer from individuals and companies wanting to commision a figure. To tell you the truth, I was flattered greatly by this. I never imagine the responses that I've recived. That made all the almost-non-stop-work in the past five weeks worthwhile. And because of that, I think I'll try sticking around in this figure-making-bussiness for now. The prospect is promising, to say the least.

I've met many interesting people there too! I've seen the form and face of my friends in the forums for the first time. I was quite surprised that one of them was built like a WWF wrestler XD. There was an aspiring local tokusatsu team called Spheres, which is no small feat considering the over saturation of imported stuff here. I really like the character design with this one, so i 'figure' (hint,hint..) something will come up in the future.

As with many toyfair, one of my main concern is my wallet. This time there's a lot of stuff. I have to resist the temptation to reach for my pocket. It was hard. At the end I bought 2 set of Gachapon. *Sigh* Oh well.

Email ThisBlogThis!Share to TwitterShare to FacebookShare to Pinterest
Label: misc.

The story so far

Been a while since my last post, many things happened.

For starters, after completing the mold for Bima (see previous post), I began casting. After almost a week, the cast won't cure. At all. The inside of the mold remains a icky-gooey mess of polyputty. The main reason for this disaster is I didn't put enough hardener for the putty.
Note to self: Be sure to put enough hardener for your putty.
So I have to ditch the Bima project for now. No Bima in toyfair (at least not the kit version).

On the lighter side, I've made another Bima. Bima ver.2 will probably made it for display in toyfair (albeit in it's clay form). I have documented the steps in making her. More of that on future posts.

Another good news is I've made another figure and it's ready to be master molded. This figure was made after the failure of Bima. It only took roughly a week to make it. That's saying something, since the Bima project took me about 3 weeks just for it to make into waste casting stage. I know a little about myself this past month, and that is if you really, REALLY put all your effort and mind in to it, something spectacular will happen.